Modvigil 200 is the brand name of generic Modafinil and one of the first versions of Modafinil after manufacturing rights were no longer exclusive. Modvigil is produced by HAB Pharmaceuticals, an Indian pharmaceutical company that manufactures a variety of other medications and supplements.

The active substance in the smart drug is Modafinil, a wakefulness promoter with potent cognitive-enhancing properties. It was initially designed as a treatment for those who suffer from excessive daytime sleepiness.

Modvigil is a huge relief to those who have obstructive sleep apnea/hypopnea syndrome, narcolepsy, as well as those whose circadian rhythm is completely messed up due to night shifts at work. This condition is called shift work sleep disorder.

Nowadays, Modvigil is mainly popular as a cognitive enhancer. The active ingredient, Modafinil, is incredibly effective at improving alertness, mental energy, and even cognitive performance. [R]

Modafinil, the active component of Modvigil

Modafinil is a wakefulness promoting narcolepsy medication under the schedule IV class of substances in the United States.The active substance of the smart drug Modvigil is structurally different from other types of central nervous system stimulants.

Withdrawal symptoms are almost non-existent, even after taking it for extended periods of time. Users have reported that the only withdrawal symptoms noted are slight fatigue and tiredness for a one or two days. Furthermore, side effects are a lot milder than typical stimulants.

HAB Pharma products Modvigil and Artvigil are in direct competition with the Sun Pharma Modafinil and Armodafinil generics Modalert and Waklert. HAB Pharmaceuticals, while a large corporate entity itself, is clearly not as prestigious as Sun Pharmaceuticals, the biggest Indian pharmaceutical corporation and 38th place worldwide in 2019.

Still, there is inconclusive evidence to suggest that Modvigil 200 is lower in quality than Modalert 200 or that there are any significant differences of any kind. The active component and the dose are the same, although the fillers might be different. Both companies have strict testing standards and highly trained specialists. One thing to consider when deciding between Modalert and Modvigil, though, is that Modalert has been on the market a few years before Modvigil entered it.

With regards to the HAB brand names Modvigil and Artvigil, the difference is in the active substance of each smart durg: Modafinil and Armodafinil, respectively. Armodafinil is the purified version of Modafinil, which includes the S-enantiomer, the R-enantiomer and modafinilic acid. Hence, the effects of the two smart drugs are slightly different, as Armodafinil is more “pinpointed” both in its structure and its effects.

Of course, there are mostly similarities between them. Just like Modafinil, Armodafinil is also prescribed for narcolepsy and other fatigue-related issues. People prefer one over the other, and this is normal, as both may serve different purposes from situation to situation. Both Modafinil and Armodafinil are strong, though. It’s important to note that many users have reported increased focus on Armodafinil, yet less obvious effects on mood.

Modafinil modulates several excitatory neurotransmitters in your brain, namely dopamine, norepinephrine, serotonin, histamine, orexin and glutamate, as well as the key inhibitory neurotransmitter GABA that controls the sleep wake cycle. Without getting into too much scientific detail, its mechanism of action is much more subtle compared to drugs like Adderall or Ritalin. The medical community is starting to acknowledge Modafinil as a safer alternative treatment for disorders that have long used Adderall and Ritalin as medicine. Though effective, the treatment with traditional stimulant drugs also has a high potential for abuse and is highly damaging.

While the effects of Modafinil are quite physically and mentally stimulating, its main action is related to combating fatigue. That’s why there is more and more evidence of its effectiveness in treating a wide range of disorders with fatigue as a key symptom. And although it may not provide the intense stimulation of other drugs, its considerably fewer side effects are what makes the difference.

Here are a few benefits noticed by patients, as well as healthy individuals:

Brain chemistry is different from individual to individual. One must take into account that your mindset, as well as your environment play a huge role in how you feel the effects of Modvigil. One pitfall of Modafinil is that you can easily become too focused on something which is not necessarily something you want to focus on. While this may sound a bit cliche, the best thing you can do to maximize the experience is to practice mindfulness over your own thoughts.

Buy Modvigil at a fraction of the cost of Provigil

You can buy Modvigil online for much lower prices than Provigil, the first brand of Modafinil available via prescription. Provigil was first produced by a team of French doctors, and first marketed by Cephalon Inc. Having acquired the patent from Lafon Laboratories, the pharma giant became the sole manufacturer and marketer of Modafinil up until their patent protection expired.

After that, several companies wanted a slice of the pie, and HAB Pharmaceuticals was one of them. Modvigil is more than 20 times cheaper than Provigil, yet no less potent. The substance is the same in both Modvigil and Provigil. The market has changed, from a monopolistic one to a buyer’s market.

Since Modvigil is produced in India, overhead costs are much lower, which is why Modvigil is a cheaper version of Modafinil, while also maintaining high quality. When it comes to buying a cheap form of Modafinil, Modvigil and Modalert top the quality / price ratio.

Modvigil contains Modafinil, which is an approved treatment for narcolepsy, obstructive sleep apnea, shift work disorder and several other conditions. Modvigil is a popular generic among individuals looking to get cheap medication manufactured by a reputable company.

Previous studies indicate that Modafinil is just as effective as traditional stimulants in the treatment for ADHD. Modvigil is not categorized as a stimulant, but rather as a wakefulness enhancer. It has fewer side effects, which has led to doctors reconsidering Adderall and Ritalin prescriptions in favor of Modafinil.

It’s also important to note that the smart drug decreases appetite while increasing the willingness to be active. Modafinil is also currently being researched as a possible weight loss medication.

Modvigil also has positive effects on mood. Furthermore, some studies indicate that it may provide substantial benefits to individuals suffering from depression. More specifically, Modafinil makes it easier for depressed individuals to get back on their feet, not mess up at their jobs and maintain a normal lifestyle.

Modvigil as a cognitive enhancer

Students and individuals with ADHD/ADD sometimes also use Modvigil for cognitive enhancement. Users report extreme focus and concentration while using this drug, as well as more effective team work. Communication is made more effective by increased input and a greater understanding of each other during projects.

Furthermore, it helps students stay awake during exam periods without the need of energy drinks or caffeine. A survey conducted on students in the UK revealed that one in four students had taken Modafinil at least once, and a substantial part of them are regular users.

Modafinil is insanely popular among business owners who want to achieve high levels of productivity. Also, many face difficulties sleeping and organizing their own schedules, which may lead to some form of chronic sleep issue. Other than medical benefits, the inspiration that the smart drug provides with regards to business development is reported to be unmatched.

How to take Modvigil?

Of course, it’s common sense that nothing should replace a proper diet and an adequate amount of sleep. Modvigil is certainly not a substitute for that. While this is not medical advice, and you should consult one or more doctors for legitimate tips, there are a few pointers that are good to know beforehand.

Considering its 12 hour duration of peak effects, the best time to take Modafinil or Armodafinil is early in the morning, but no later than early afternoon. Many people prefer to split the 200 mg tablet in two and take it twice early in the day. Frequency and dosage are subjective matters that are best determined by consulting a medical practitioner.

When it comes to how not to take Modvigil, things are quite straightforward:

-Don’t use Modvigil in combination with other stimulants. This may lead to experiencing adverse effects such as anxiety, restlessness or insomnia.

-Taking Modvigil without food in your belly can lead to nausea. Make sure that you eat a nutrient-rich food before ingesting it.

-Make sure that you stay properly hydrated. As time passes and your focus level increases, you may forget about drinking water. Keep a glass of water nearby and remember to take constant sips. Dehydration caused by Modvigil is slightly more obvious than caffeine. Another way to stay hydrated is to eat fruit during the experience.

-Mind your setting when taking Modvigil. You’ll want to be in a place free from distractions. Of course, as the pandemic looms and public places remain closed, your best bet would be to make your room a productive place.

Modvigil comes in 200 mg tablets, though they aren’t always intended to be taken in a single dose. Usually, therapeutic doses of Modvigil range between 100 mg and 400 mg. Off-label use for enhanced focus requires less to be effective. Doses can be as low as 25 mg for some people, though 50-100mg is usually the preferred dose.

People suffering from narcolepsy or obstructive sleep apnea should take one Modvigil pill in the morning and one in the afternoon, at most. Usually, one Modvigil tablet is enough for a day, even for therapeutic purposes. Its long half-life is “to blame”.

Modvigil 200mg usually takes around one hour to kick in. Those who suffer from shift work sleep disorder should take this into account before going to work. Still, body chemistry differs from individual to individual and you should talk to your physician before starting treatment.

The key to using Modvigil and smart drugs in general  is to find an optimal dose. That optimal dose is defined by the minimum amount you need to experience the desired effects.

The side effects of Modvigil are mild and in direct relation to dosage. So far, doctors do not believe that there are any serious health concern with using Modafinil. Common side effects have been extensively studied in clinical trials, as well as reported by users in online forums. The most common are nausea, anxiety, indigestion, diarrhea, difficulty falling asleep and dehydration. Furthermore, you can minimize side effects by drinking lots of water and taking it early in the morning.

More than often, people who experience side effects have taken large doses of Modvigil or individual intolerance to Modafinil. Thus, lowering doses and/or using harm reduction practices may be the solution.

Still, the drug can cause sleep disturbances, especially when taking it late in the day. Fortunately, things like insomnia or long periods of time to fall asleep can be avoided. Exercise and eating a heavy meal at the end of the day will make falling asleep easier.

The half-life of Modvigil is very long (12 hours -15 hours) and its stimulating effects coincide with this period. Unless you plan an all-nighter, keep your dosing as far away from sleep-time as possible.

Of course, there will always be people who misuse things. If you combine Modvigil with other stimulants and experience panic, rapid heartbeat or other worrying side effects, contact a primary care physician immediately.

You should not take Modvigil (generic Provigil or any other brand of Modafinil) if you’re hypersensitive to Modafinil or Armodafinil. Remember to consult your doctor before using Modvigil. It’s absolutely a must if you find yourself experiencing rashes because of Modafinil or the inactive ingredients of Modvigil tablets.

Avoid using Modvigil or any other generic version before, during and after pregnancy.

Modvigil may interact negatively with medicine that you may be taking. If so, it is imperative that you tell your doctor and take his word into account before buying Modvigil. 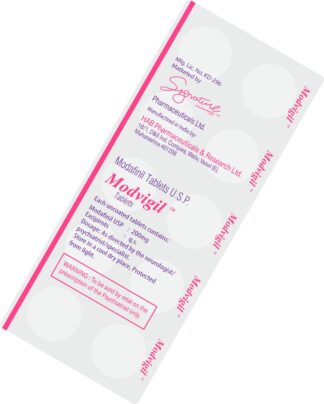